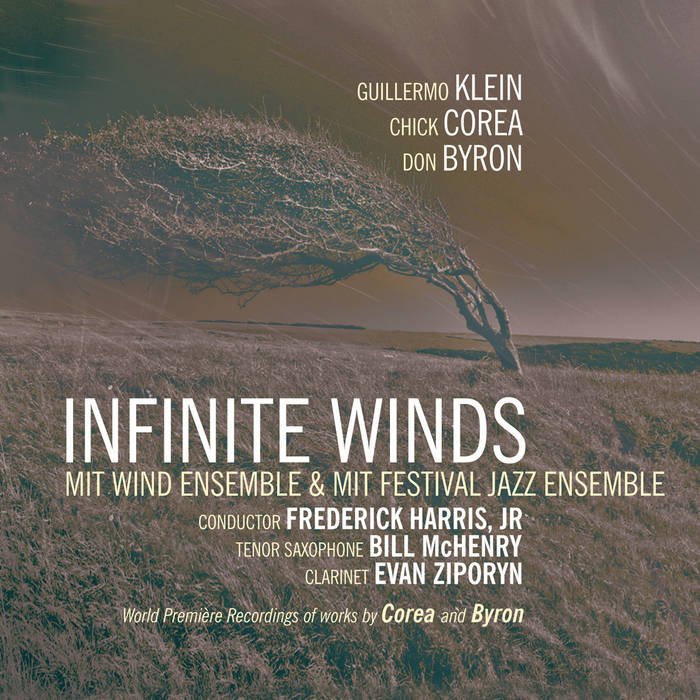 Music composition has long been the home of brilliance and discovery. Many composers prove their genius by bending sound, rhythm and texture into new concepts in aural art. It is no surprise that the illustrious Massachusetts Institute of Technology hosts two of the best student driven ensembles in the country, the MIT Wind Ensemble (MITWE) and the MIT Festival Jazz Ensemble (FJE).

The FJE was established by the great trumpeter/bandleader/educator Herb Pomeroy in 1963, while the MITWE was established in 1999 by Dr. Frederick Harris, Jr., who now directs both ensembles. The groups are made up of undergraduate and graduate students from MIT and have been instrumental in performing new compositions from a broad range of composers.

Klein’s involvement with Dr. Harris began in the mid-1990s when Klein was living in Boston, collaborating with big bands and even a string ensemble. It was only natural that Harris would reach out to Klein and commission a piece for the MITWE. Klein provided a work in seven movements entitled Solar Return Suite, his first and only composition for wind ensemble, which was recorded live in May 2006. The piece also features a beautiful, largely improvised saxophone performance from McHenry, a regular collaborator with Klein.

Solar Return Suite drew inspiration from a number of sources. Klein utilized a symmetrical diminished mode (or octatonic scale) that he found repeatedly in the work of one of his favorite composers, Olivier Messiaen. The same mode can be found in composers as diverse as Duke Ellington, Charlie Parker , and Rimsky-Korsakov. Lastly, Klein drew inspiration from the Cátaros (or Cathars), a heretical Christian movement with roots in Byzantine Anatolia that was viciously suppressed by the Roman Church. The Cathars believed there were two principles, good and evil. Good was represented by the God of the Old Testament, while evil was represented by Satan and his creations, including the human body. Salvation was achieved through consolamentum, a ritual baptism by fire instead of water, allowing the spirit to escape the body.

Pianist/composer Chick Corea has had a long and illustrious career as a jazz performer and conceptualist. His MIT connection goes back to his teen years in Massachusetts when Corea played trumpet and piano in a jazz sextet he formed with MIT students. It was Herb Pomeroy who offered Corea his first professional club gig as a bandleader, opening for the Herb Pomeroy Big Band. It was in tribute to Pomeroy and the 50th Anniversary of the MIT jazz program that Corea composed From Forever (Suite for Big Band Dedicated to Herb Pomeroy). The MIT Festival Jazz Ensemble does the music justice as it performs the sweeping, swinging piece with sincerity and depth.

Clarinetist/composer Don Byron has been an eclectic music stylist and innovator since the early 1980s. From jazz and modern classical to hip-hop, Byron has brought his unique audacity that has won him fans worldwide. It was no surprise that his Concerto for Clarinet and Wind Ensemble would be inspired by the esoteric film and television scores composed by Leonard Rosenman. The Brooklyn born composer was well known for his scoring work for films like Barry Lyndon and Bound for Glory but might be best known for writing the theme to the television show Combat!.

It was Rosenman’s dramatic flair along with Byron’s appreciation for the Second Viennese School military music and the 20th Century modernists’ developments in writing with clustered, tenseness that informed the writing for the Concerto. Direct references to marching music were written into the three movements, which provided a fantastic setting for solo clarinet, performed here by the tremendous clarinetist (and brilliant composer) Evan Ziporyn.

The MIT Wind and Festival Jazz Ensembles’ recording Infinite Winds presents a wonderfully broad range of musical styles from composers who have surpassed the limits of jazz and modern classical composing. The pieces by Klein, Corea and Byron differ greatly but are performed skillfully by the two ensembles, highlighting all their nuances and dynamic vitality.

Bandcamp Daily  your guide to the world of Bandcamp